Why Secure Data Erasure is Crucial to Protecting Your Identity 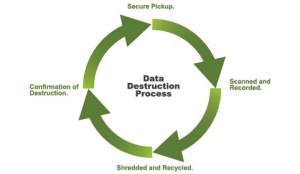 Proper disposal of critical and personal data is of utmost importance. Electronic devices contain an enormous range of details, from bank accounts through to telephone numbers and addresses or confidential files, reports, and data. Even the GPS coordinates used by mapping apps on smartphones can be used to deduce locations and to commit crimes. Photographs are similarly valuable to a criminal: although many people think they are not relevant in a crime, they can show many pieces of information which could be used to commit fraud.

In some instances, data from devices is used by being put into a database, through which committed hackers will be able to use software to generate probable passwords – allowing them to hack into much more sensitive areas. The majority of computer devices today have some inbuilt memory, from Dictaphones and mobiles through to photocopiers and computers and laptops themselves. If this information is not correctly removed when the device is at the end of its working life, it could easily fall into the wrong hands.

‍Identity theft is a rapidly growing area of crime and fraudulent activity which affects more than one hundred thousand people in the United Kingdom on an annual basis. Research in some counties of Great Britain found that up to ninety percent of computing equipment was thrown away while still containing pieces of sensitive information. The average criminal can retrieve data from these devices in under five minutes, compared to the estimation provided by the Home Office that it takes a victim three hundred hours to correct the damage done by fraudulent activities. Identity fraud reportedly costs UK businesses more than $1.5 billion per year.

At the end of a device’s useful lifetime, it is essential that all information is removed. Some people choose to try and reformat their hard drives themselves, while others use the services of a professional data destruction company who can guarantee the destruction of relevant information.

What Is IT Asset Disposition (ITAD)?
Data Management Challenges for IT Managers
5 Tips on Managing a Hybrid Workplace
Current Data Destruction Standards Explained
Top Electronic Recycling FAQs for IT Managers
Helpful Performance Review Tips For Managers
Ultimate Year-End IT Manager's Checklist
Top Ways To Help Your IT Team With Burnout
IT Manager Soft Skills You Need to Succeed
Guide to Hiring and Retaining IT Workers
Top Data Protection and Privacy Challenges
What is a Certificate of Data Destruction?
Biggest Challenges for IT Managers
Time Management Tips for IT Managers
Declutter Your Home Office
The Best Firewalls for Remote Workers
Networking Apps for Remote Workers
Securing Your Work From Home Networks
Secure Hard Drive Disposal
Small Business Personal Asset Protection
Electronic Waste Disposal for Businesses
e Waste Definition Explained
Where to Recycle a TV
Five Ways To Dispose Of Your Microwave
Recycling Old Chargers and Cables
Some Safe Computer Disposal Procedures
What To Do With An Old Laptop
Step By Step: Laptop Recycling Procedure
Electronics Disposal, What You Can, And Can't Recycle
Where To Recycle Electronics
Cell Phone Recycling Procedures
eWaste Recycling Near Fullerton CA
Are Landlords Responsible for Tenants' Electronic Recycling?
What Do E-Waste Centers Do?
How Electronics Are Recycled in the US
When Should You Look for an E Waste Recycling Consultant?
Why Would You Need An Electronic Recycling Company?
Why Do Magnets Wipe Hard Drives?
Computer Parts Recycling
Proper Disposal of Old Servers
Deperming and Degaussing
How Recycling Electronics Can Be Improved?
The Growing Problem: E-Waste
Safe IT Asset Disposal
Recycling Electronic Components
Sell Your Used IT Equipment
The Correct Way to Dispose Your Laptop
Properly Disposing a Printer
Recycling Your Microwave Properly
Why is Recycling Important?
Understanding the Importance of NAID
How to Recycle a Printer
ITAD Service Provider
IT Asset Management
What Does ITAD Stand For?
How Can Smartphone Recycling Work
Tips on Disposing Your Computer Correctly
What is the Main Goal of Secure Data Destruction?
The Benefits of Recycling E-Waste
Recycling E-Waste
Degauss a Hard Drive
What Is the Chain of Custody and Why Is It Important to You
HDD & SSD, Which Is For You?
DoD Data Destruction - What You Need to Know
What You Need To Know About Hard Drive Degaussers
Onsite Data Destruction vs Dropping Items Off
Top 3 Benefits of Techwaste Recycling
Computer Security Day
How Much is the Electronic Recycling Fee
Upgrading Electronics for Black Friday, Recycle Old Electronics
America Recycles Day
Why You Should Recycle E-Waste
What Can We Do to Help Recycle
What is a CRT TV?
What is the Open Security Foundation?
Federal Recycling Laws
What is Degaussing and How Does it Work
Tape Drive vs Hard Drive - Which Should You Use?
Are you Following the Best Practices for Hardware Asset Management
Recent Landfill Data Containing E-Waste
How Do Solid State Drives Work?
Destroy VHS Tapes
How is Electronic Waste Recycled
Data on Recycling
Do you Know the Patron Saint of Electronics?
What Services are Typically Offered by E-Waste Recycling Companies?
Things You Should Include in your Data Breach Plan
What Can We Do About Electronic Waste
List Of Important Stats Regarding E-Waste
What Can We Do About E-waste
What Happens to Electronic Waste
What is ITAD?
How Does Smartphone Recycling Work
What Does the EPA Say About Electronic Waste Disposal
What is a Degausser and Why Should You Consider Using One
Recycling Misconceptions: Electronics Shredder
Data Destruction Procedures
Electronics Recycling in LA County
What is IT Asset Disposition?
Recycling Electronic Devices: How to Go About it, Where to Go?
← PREV BLOG
NEXT BLOG →