What Are the Dangers of Disposing Cell Phones in Landfills? 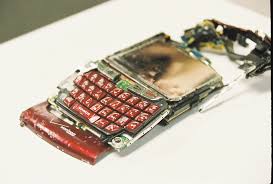 In the developed world today, it may seem like almost everyone has a cell phone, and technology companies are always coming up with newer models which are better than the ones which came before it and have more features —meaning that there are still cell phones being disposed of. Unfortunately, many people throw them out in the trash without knowing the dangers. It’s not only that cell phones add extra mass to the already ever-growing landfill sites, but also that they can contaminate groundwater and the surrounding environments by releasing the toxic substances used to build these cell phones.

Many cell phone batteries contain Arsenic, a highly poisonous substance, which, if allowed to leak out into the environment, can cause severe skin problems even at low levels of exposure. Cell phone batteries also contain lead, as does the solder used in putting together certain parts of the handset. Lead can damage the nervous system of humans and animals, as well as causing extensive damage to any local plant life. Disastrously, up to 40% of all of the lead found in landfill sites are from consumer electronics.

Mercury is found in many different parts of a cellphone, and because it is in a liquid form at room temperature, it can very easily find its way into streams and rivers. From there, it starts to build up and finds its way into the food chain. To put it bluntly, fish ingests it, and then we consume fish. Mercury can cause all sorts of problems to health as a result of exposure which ranges from brain damage to congenital disabilities and miscarriage.

Many cell phone carriers will be able to help you recycle your old handset, so it is worth contacting them first, and even if they can’t help directly, they will be able to put you in contact with someone who can. Think before you trash and be very mindful of e-waste disposal!